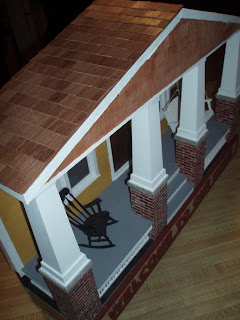 As much as I planned and thought through how the various pieces would come together, I forgot to consider the layer build-up of the shingles on the fascia above the ceiling. I could have set the board in that section back another 1/8". Easily. I could even have set it back farther than that if I had wanted. But I didn't. And now I regret it.

Once I added the shingles, they protruded further to the front than I had thought they might - even though I had cut and sanded them myself! I made them 1/32" thick - really thin. But when overlapped, the overall depth of the shingles came out to about 3/32". I set the fascia board so that it was recessed only 1/16". That doesn't seem like a problem, until you see the top layer of shingles protruding beyond the face of the surrounding boards. It's not very noticeable in the photo at left, but in person, it's noticeable.

At our last meeting, one of our members was worrying that she might have made a mistake in her work. I told her, "If you think I haven't made any mistakes in doing this project, think again!" (She was thinking mine looked so flawless.) Some mistakes are easier than others to fix or hide. I've hidden most of my errors so far. I'm not sure if I have a good fix for this one, but I'll work on it..

This brings to mind an article I read recently by a woodworker. He had completed a project and shared it with his friends. None of his friends noticed a tiny flaw that had occurred while he was working on the piece. When they complimented him, though, he couldn't help but point out the flaw, and immediately, they ALL saw it. Most of the time, if we don't point out the flaw, the average person will take in the overall view of the item and will never notice the flaw. If they do, most times common courtesy should generally cause them to withhold a comment in which they point it out.

If you're making your miniatures for sale, that's a different story. Then the buyer will be scrutinizing the item for every tiny flaw that they might see. Each identified flaw, of course, becomes a new bargaining point for their argument to reduce the asking price. Maybe that's why I don't sell my miniatures!
Posted by George the Miniguy at 11:20 AM

Hello George,
Slight miscalculation. I am sure you will fix it and it will look fantastic. Even with the tile situation it looks beautiful.
Hugs,
Giac

Hi George! You are so right! If you don't point out the flaws than others don't generally notice them. I think if you are taking photos of the work where every little thing is magnified to the nth degree, it is easy to become extremely self critical and extra demanding of ourselves and the items we produce. I know that I am NEVER satisfied and it bugs me that I don't know how to be happy enough with what I do! You will probably end up correcting the shingles because if you don't it will bug you forever!

I am soooo... glad I found this site (saw it in John's (Merriman Park) site. It is great. I love your discussion about making mistakes in our work. I am always devastated when I find that I have done something wrong. I love all your advise and how to do the things you do.

Thank you for sharing.

I also want to say that I joined your site so I do not miss anything you post!

Once again, thanks for sharing.

George: Just visited your site today and sat in front of my computer all afternoon to read every post from the beginning. Love your work and the information you have provided about tools and tips is priceless. Thank you so much. - Marilyn from Canada