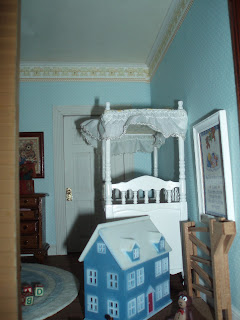 What's the best materials to use to build room boxes or dollhouses? I've built two dollhouses from scratch - one with 3/8" birch plywood and one with Gatorfoam. (The photo at left is of a house built with Gatorfoam.) I was happy with both projects. But dollhouses are generally box construction projects. Unless they have turrets or bays, the building is pretty much 90 degree angles - simple to do.

Room boxes, on the other hand, are often more complicated. The design of a room box is like a stage set design. Few of the angles are actually right degrees. This allows the artist to create a variety of angles in the room and a sense of depth in a small space. It also makes construction of them more complex.

There are drawbacks to using both Gatorfoam and plywood. Both comes in large sheets. Cutting large, flat sections of wood or Gatorfoam, on a small hobbyist's table saw can be a challenge. At best, you'll waste more of the expensive building materials than you would like. At worst, you'll not get the walls cut precisely at the angles you need or want, leaving gaps and walls standing at awkward angles. Some of these gaps can be hidden with crown molding or with matte board glued to the ceiling of the room. Baseboards and flooring also help hide any gaps along the floor seams.

I've made several roomboxes now, and for two of them, I utilized old-fashioned, stick-frame building with matte board glued to the surface. The stick-frame uses pieces of wood assembled much like a real building is built. The problem with the stick built frame is that it's a bit flimsy until it's all glued up with the matte board attached. It's too easy to glue it up so and end up with walls not being perfectly square with the ceiling or floor.

The barbershop project our miniature club is working on is a perfect example. I cut out the pieces for everyone. The pieces were all the same size and shapes, planed to within microns of being the same in shape and angles. Yet, the four people assembling them ended up with slight variations in the finished product, and the angles of the corners are all slightly different one from another. Go figure!

The advantage of the stick frame build is it's lightweight, and you can easily run wiring through the walls or along the walls. The disadvantages are the irregularities you can get with assembly.

I have also done some construction with the paper-backed foamcore material. This material usually comes in quarter inch thickness. I have found two problems with it. One is that it tends to warp pretty easily. Add wall-paper to it, and as the paper and glue dry, the foam can become distorted.

I also find it a bit flimsy. It just doesn't seem like a product that will hold up for an extended number of years. If you don't intend on keeping your miniature creation for an extended period of time, then maybe it would be okay for your project. I plan to burden my kids and maybe even my grandchildren with my creations. ;o) So, when I build my pieces, I want them to be durable.

The most stable, light-weight and easy to work with material is the Gatorfoam. An added bonus to it is it's white. So, if you want white ceilings for your room, there's little or no painting that you need to do! The downside of the material is it's expensive, and not widely available. If you're okay with mail ordering, though, then you're probably good to go!

I started building Pam's dollhouse over 30 years ago, and the house is still as structurally sound as it was when I put it together. The ceilings are still white. The foam core has not shrunk. I know this, because no gaps have emerged.

You can't use screws or nails to put Gatorfoam together. I discovered, though, that a little glue and wooden pegs I made from dowels worked quite well. I used a pencil sharpener on the dowel pieces and then I used my X-acto knife to cut gill-like edges along the sides of the pegs. The sharp pencil-like tips made it easy to push the peg into the Gatorfoam, and the gill-like edges helped keep the pegs from pulling back out.

Even though I've built three dollhouses now, I still want to build a computerized, animated, haunted house. When I do, I will most likely use Gatorfoam to build it. And I think if I do another room box, I'll use Gatorfoam for that project, too!
Posted by George the Miniguy at 3:10 PM 5 comments