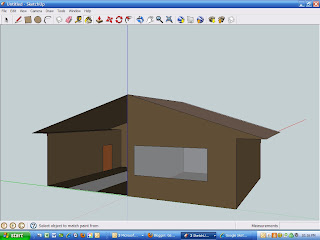 Tonight, I began to experiment with some new, three-dimensional software from Google called Sketch-Up. It's available FREE from Google. Working with this software is reminiscent of the first time I started to do something in PowerPoint.

I felt lost and a bit overwhelmed, but excited at the same time. It's just amazing what you can draw using this software - if you know what you're doing. You can "put a hole" through a solid object in no time at all. Create a square, click on the pull out icon, and suddenly you have a pillar or a box - whichever you need!

I hope to become proficient at using it, because it allows the user to see every angle, every side of a project - even the bottom of the object! What an interesting tool for drawing up dollhouse plans or for designing mini furniture! I hope I will someday say I feel as competent in using it as I do with using PowerPoint! That only comes with practice and experience, though. So, back to the (online) drawing board!  See ya later!
Posted by George the Miniguy at 10:34 PM 3 comments

I was hoping you all would get a laugh out of my goofy demolition story. The saga of the deck just continues. Here is part two of "the project."

So, my daughter and I went to City hall and applied for the building permit. The chief inspector was there. He shook our hands. Took a very long look at each of us, and repeated our names a couple of times - as if preparing himself to be able to recognize our obituaries in the newspaper after we dug the postholes. He almost had a look on his face of "You poor fools. You have no idea what's in store for you!" But he kept his comment to himself.

Once I picked up the auger, I realized that in spite of her can do/never say die attitude, there was no way my tiny little daughter and I were going to be able to handle that auger. So, I prepped the holes - dug all six of them about 18 inches to 2 feet deep. All my son-in-law and I had to do was to plop the auger in the hole and dig down another 18 to 24 inches. Piece of cake! Right?!?

...or not. We got the auger started and it dug like crazy. It pulled itself into the earth like there was no tomorrow. Then we tried to lift it out. Uh, I said LIFT. Um, no go. I said, LIFT!!! Nothing happened. The auger had dug itself into the earth, and it seemed like there was little or no chance of our freeing it from its self-dug grave. But the devilish thing cost me $90 to rent, and I knew I had to get it back to the rental store. So, my son-in-law got out a tiny plastic trowel, and we took turns reaching into the hole and digging out what seemed like tiny spoonfuls of dirt. We eventually got down to the auger blade, and once we did, it was somewhat easier to pull it out of the hole. When we got it fully extracted, with its extension still on it, I realized that the handlebars were nearly up to my armpits.

By this point, both my son-in-law and I were tired, but we rested up and got ready to take a stab at digging posthole #2. Then the digger wouldn't start. We pulled. We adjusted the choke. We pulled and pulled again. Nada! Zip. Not even a burp out of the stupid machine. By this point, my arms were already aching and my son-in-laws back was, too. We agreed we'll try a smaller machine and dig down from there to the official 42" frost level. So, tomorrow is another day. Maybe we'll get this deck built. Miniatures are looking better and better every moment as we go further into the holes!!!
:o)
Geo.
Posted by George the Miniguy at 7:53 PM 2 comments

Fair warning... this is not your usual blog from me...

I am reminded today WHY I like working in miniature so much. I'm about to build a deck with my daughter at her house.

Yesterday, I tore down the old back porch from her house. The wood was quite weathered, and many of the screws were hard to remove. I finally took my power saw and started cutting. What I couldn't tear apart with the saw, a sledge hammer managed the rest. I was down to the last upright post, which was hanging on by a few strands of wood. So, I took my sledge hammer and gave it a whack! That did it! The 8 foot tall 4x4 careened over to its side -- right into my daughter's 3' x7' plate glass window! They tell me it will cost a little over $400 to fix it....

Next, I called the rental supply to line up a power post-hole digger (an auger). The guy at the rental place said, "It works best with these power augers for the two people running it to be the same size." (I'm 6'4". My daughter is 5'2".) "Otherwise," he said, "the shorter person really takes the brunt of the lifting and running of the digger." My daughter is all of about 110 lbs. I'm a string-bean, too. The auger weighs 80 lbs. This could be a very interesting day.

So, here's my list of why I like building miniatures as opposed to full-size stuff...as if I really need to tell you, dear readers!

Posted by George the Miniguy at 9:20 AM 7 comments